A defensive halfback and blocking back in the single-wing offense of the 1948-1950 football teams, Dick Campbell earned honorable mention All America honors in 1950. Recruited by Coach Bowden Wyatt, Campbell joined the Wyoming football team in 1947 after two years in the Army. During his three years, Wyoming compiled a record of 23-6. Chosen unanimously by his teammates as the captain of the 1950 team, Campbell led the Cowboys to a 10-0 record, the Skyline Conference Championship, and Wyoming’s first-ever bowl game, a 20-7 win over Washington & Lee in the 1951 Gator Bowl. Campbell scored the game’s first touchdown. The 1950 team is still the only team in Wyoming history to go undefeated, untied, and win a bowl game. A unanimous all-conference player, Campbell caught every pass thrown his way as a junior and senior, eighteen straight catches for 122 yards and two touchdowns. He was described as an “exceptionally fine blocker and an outstanding defensive halfback”. Following his senior year, he was selected to play in the College All-Star game in Chicago and was drafted by the Washington Redskins. 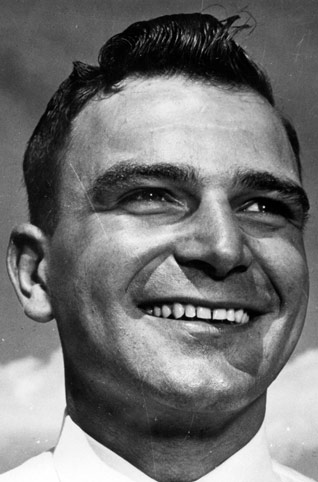