One of the best kickers in UW football history, Bob Jacobs served as both the placekicker and punter for the Cowboy football team from 1968 through 1970 and led the team in scoring in both 1968 and 1969. He kicked 37 field goals in his career, the most ever at the time. During his sophomore season in 1968, Jacobs led the nation in field goals made, ranked third in the nation in scoring by a kicker with 68 points, and ranked 5th nationally in punting average. That year, he kicked a 47-yard field goal against Arizona State and had a 77 yard punt at BYU. In 1969, he was named to the Look-FWAA All-American Team as well as The Sporting News All-American Team after setting a national record with 18 field goals and leading the nation in scoring by a kicker with 76 points. A two-time All-Western Athletic Conference player, he averaged 41.8 yards per punt for the Cowboys and led the WAC in punting in both 1968 and 1969. He still holds UW records for average punts per game (career), average punts per game (season), total punts in a season, and co-holds the UW records for average field goals made per game and punts in a single game. As a senior he was chosen to play in the AFCA All-American Football game, the Blue-Gray game, and the Hula Bowl. He still holds the Hula Bowl record for most PATs with 6. For his career, Jacobs kicked 37 of 77 field goals, 57 of 64 PATs, and scored 168 points for the Cowboys. His career-long field goal was a 48-yarder against Arizona State in 1970. He was drafted by the Cleveland Browns in 1971. 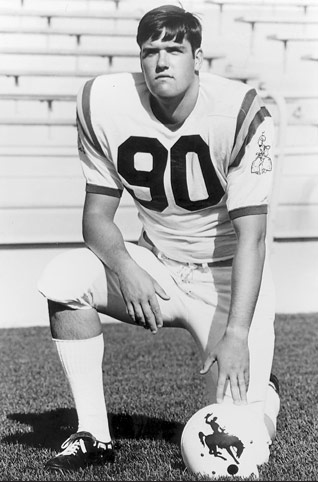