A native of Philadelphia, Miss., Walker “Sonny” Jones played his first two years of collegiate football at Mississippi State. When MSU assistant coach Bowden Wyatt accepted the head coaching job at Wyoming prior to the 1948 season, he convinced Jones to transfer to UW and play tailback in Wyatt’s “Tennessee T” single-wing offense. In his first game as a Poke, Jones, a former Mississippi state track champion, ran for 210 yards (still 9th best on UW’s all-time single-game list) and scored three touchdowns, including a 100-yard kick return, in a 61-7 win over Colorado College. He also returned a punt 95 yards for a touchdown vs. Montana State that year. Overall, he rushed for 680 yards and scored 54 points during the 1948 season and was named All-Conference. He liked Wyoming so much that he convinced two former Mississippi State teammates, blocking back Truitt Smith and center Jerry Taylor, to transfer to UW as well, laying a foundation for years of success. As a senior in 1949, he teamed with Eddie Talboom, a UW Hall of Famer as well, to become Wyoming’s tailback “Touchdown Twins”, and again earned All-Conference honors. That year, Talboom and Jones finished one-two in the league in scoring and Jones rushed for 817 yards and scored 78 points, ranking 6th in the nation and earning AP honorable mention All America honors. Jones was drafted by the Chicago Cardinals in 1950. 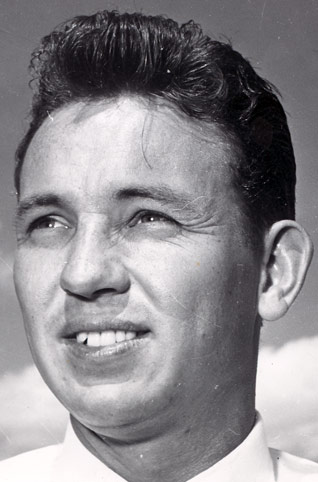