On June 11, 2005, Shauna Smith became the first woman in the history of the University of Wyoming to win an NCAA National Track and Field Championship as she won the 400-meter hurdles in a time of 54.32.  The time set new Mountain West Conference and Wyoming outdoor records, which still stand today.  Named the 2005 NCAA Women’s Athlete of the Year for the Midwest Region by the United States Track Coaches Association, she also earned a spot on the 2005 US National Team and competed in the 2005 World Track and Field Championships.  She was ranked as high as 5th in the world in the 400m hurdles in 2005.  Competing in the 400m dash and as part of the 4 x 100 relay team as well as the 400m hurdles, she was a five-time All-American, a six-time MWC champion, and earned all-MWC honors fourteen times.  She still holds the MWC and Wyoming records in the Indoor 400m dash, the Indoor 4 x 100 relay, and the Outdoor 400m hurdles.  Individually or as part of a relay team, she holds six Wyoming records.  At the 2004 U.S. Olympic Trials, she placed sixth in the 400-meter hurdles with a time of 54.42.  Smith was also selected as the All-American Strength and Conditioning Athlete of the Year by the National Strength and Conditioning Association in 2004.  With her eighth-place finish at the USA Track and Field Championships in 2003, she became the first Cowgirl hurdler in UW history to earn All-American honors.   A native of Sheridan, Wyo., she was named the 2002 MWC Freshman of the Year for both the indoor and outdoor track and field seasons.  Following her college career, Smith competed internationally for a few years. 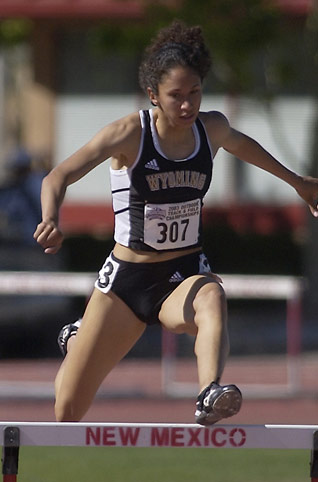