A four-year letterwinner and one of Wyoming’s greatest defensive tackles, Rabold had 23 tackles as a freshman defensive tackle in 1984, sat out the 1985 season after undergoing a spinal fusion, and moved to the offensive line in 1986. He was moved back to defensive tackle in 1987 and responded with an outstanding year, tallying 100 total tackles, 14 quarterback sacks, four tackles for lost yardage, nine quarterback hurries, and forced two fumbles while earning second-team all-conference honors. He had seven tackles and two sacks in the 1987 Holiday Bowl. He followed that up with an even more dominant senior year. In 1988, he started all 13 games for the Cowboys, compiling 85 total tackles, 16 sacks, two tackles for lost yards, two forced fumbles, and 18 quarterback hurries. For his efforts, he earned AP All-America honors and was named the WAC Defensive Player of the Year and first team all-conference. A team captain as a senior, he had 11 tackles, including three for lost yards, in the 1988 Holiday Bowl. The Cowboys were 21-3 during his junior and senior years, never losing a conference game and winning back-to-back Western Athletic Conference championships He was drafted in the 9th round of the 1989 NFL Draft by the Buffalo Bills. 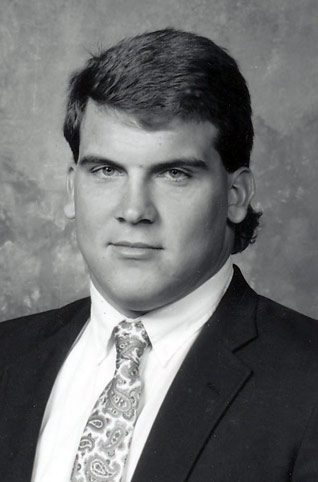