Jumpin’ Joe Capua was a tremendous sparkplug for the Cowboy basketball team from 1954 through 1956. The wiry guard from Gary, Indiana was referred to by media as, “a ball of fire all over the court, passing, shooting, dribbling, defending, and stealing the ball.” Capua was an All-Skyline Conference selecition for two seasons and received honorable mention honors on the United Press International All-American team. In 1956, he was a unanimous All-Skyline choice, and Wyoming’s leading scorer averaging 24.5 points per game. He was also the Skyline Player of the Year that season, and recieved the prestegious Admiral Land Award. That season he shattered the Skyline Conference record for most points scored with 51 against Montana. That mark remained the Memorial Fieldhouse record as well as the school record. Capua also holds the record for free throws made and attempted in a season and free throws attempted in a single game. 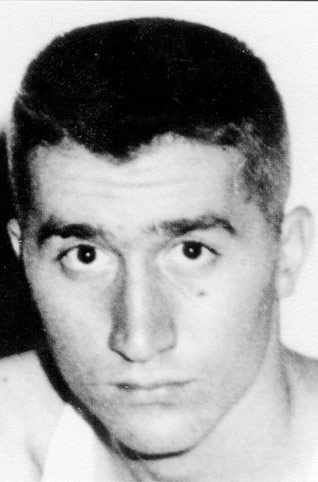