A multi-talented athlete, Jesseca Cross starred in basketball for the Wyoming Cowgirls from 1993-97. As a four-year letterwinner, Cross was first team all-conference in 1995-96 and second team all-conference in 1996-97. She was a three-time academic all-WAC selection and a three-time WAC Scholar-Athlete, and was honored as Wyoming’s NCAA Woman of the Year in 1996-97. A terrific all-around player, Cross is still listed in the Wyoming record books as 14th all-time in scoring, 11th in assists, 11th in rebounds, 18th in steals, and 7th in three-point field goals made. Following her basketball playing days, Cross embarked on a stellar career as a thrower for UW’s track and field team. She earned All-America honors three times, once in the indoor 20 lb. weight throw (1996), and in the indoor and outdoor shotput (1998). She still holds the UW records in the indoor and outdoor shot put, while ranking 3rd in the discus, 6th in the hammer throw, and 8th in the indoor 20 lb. weight throw. In 1998, Cross was honored as a National Strength & Conditioning All-American. Cross competed in the 2000 Olympic Games in both the shotput and the hammer, becoming the first female athlete ever to compete in both of those events at the same Games. 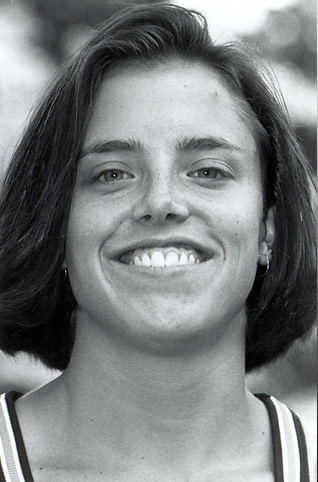