A two-time Olympian (’64 and ’68) and USSA Senior National Champion (’68), Martin was recognized as one of America’s elite ski jumpers during the 1960s. His national and international reputation helped put Wyoming on the ski map and enhanced recruiting for the Cowboys. As USSA Junior Champion in 1962 and 1963, he earned a scholarship to the University of Wyoming. In 1966, he was a member of the US team at the FIS World Championships in Norway competing in the 70- and 90-meter jumps. As co-captain and top jumper for the Cowboys in 1967, he was a leader in the Pokes’ 2nd place finish in the NCAA Championships – just 0.8 points behind perennial champion Denver. He was also the first President of the University’s Ski Club. His example contributed to the success of Wyoming ski teams at the beginning of an era of national recognition for the Cowboys. Known in the trade as a “natural” and a “ski flier,” Martin’s trademarks were style and aerodynamics. He adapted the speed skaters’ cap for use by jumpers in order to reduce friction and increase speed down the takeoff ramp. To this day, he continues to be involved in ski jump judging, administration, and promotion. In 2008, he was elected to the American Ski Jumping Hall of Fame. 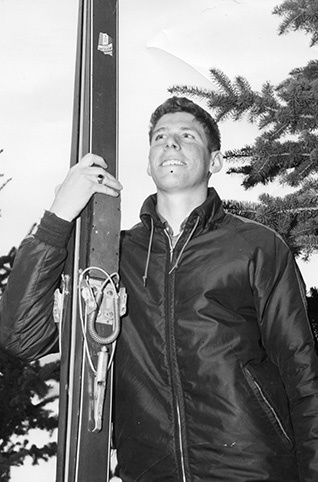