One of the greatest athletes ever produced by Cheyenne–he was the city’s Athlete of the Decade for the 1960′s–Dick Sherman was one of Wyoming’s best shooting-rebounding combinations in school history. This All-Western Athletic Conference performer teamed with fellow-Hall of Famer Flynn Robinson to become one of the Cowboys’ most prolific one-two scoring tandems ever. The team captain in 1966, Sherman led the Cowboys in field-goal percentage for three seasons, and led the WAC in field-goal percentage during his junior season of 1964-65. His name is still listed among Wyoming’s Top Ten in scoring average and rebounding average for a season. During his senior season of 1965-66, he averaged 21.2 points and 10.4 rebounds per game. His 44 points against Rhode Island on December 27, 1965, remains the sixth-best single-game scoring effort in school history. During the 1966 season Sherman and Robinson led the Pokes to a team average of 91 points per game, Wyoming’s single-season record for scoring average. A 1966 graduate of UW, Sherman not only was selected as the Most Outstanding Education Major, but was honored as the Most Distinguished Military Graduate for the school’s ROTC program. A helicopter pilot in Vietnam, Sherman earned the Distinguished Flying Cross for heroism. He produced a distinguished 31-year career in the Army. 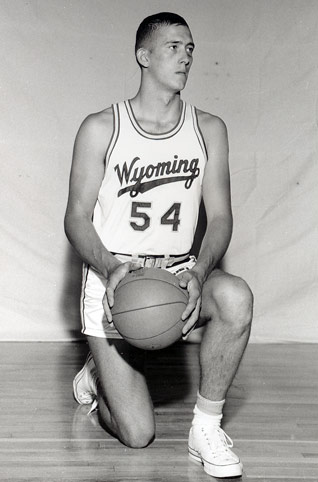