A nine-time Wyoming Sportscaster of the Year as selected by his peers of the National Association of Sportswriters and Sportscasters, Walsh has been the “Voice of the Cowboys” since 1984. Hired by broadcasting legend and UW Hall of Famer Curt Gowdy, Walsh began as a color analyst for Cowboy football and play-by-play announcer for basketball in 1984. In the fall of 1985, he added play-by-play duties for football and his voice quickly became synonymous with Wyoming Athletics. A graduate of San Diego State University, Walsh began his career in Wyoming as the sports director at KVOC Radio in Casper and play-by-play voice of the city’s Wyoming Wildcatters, a pro basketball team. Walsh was inducted into the Wyoming Association of Broadcasters Hall of Fame in 2015, and has made famous the phrase, “the score, oh the score” after each Cowboy victory. He also produces and hosts the long-running radio show “Wonders of Wyoming”. 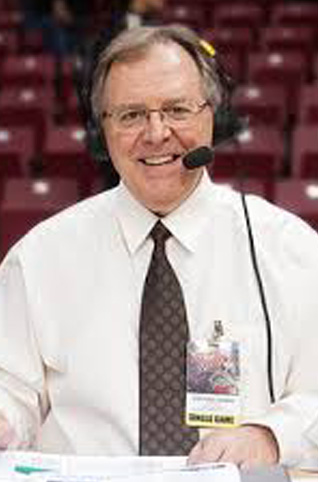