Namedhonorable mention All-America by the WBCA in 2003, Bacon averaged 15.1 points and 6.8 rebounds during her Cowgirl career.  She earned all-Mountain West and all-District VII honors three times in her career.  A forward/center, she scored 1,692 points (fifth all-time at UW) and brought down 761 rebounds (eighth).   As a freshman in 1998-99, she was voted to the MW All-Newcomer team.  An excellent all-around athlete, she twice led the Cowgirls in scoring and was among the team leaders in rebounding, blocks and steals each of her four years.  She recorded 23 double-doubles in her career.  In 1999-2000, she was second in the conference in scoring and led the league in free throw percentage (.830) as a sophomore. She produced the fourth- and fifth-best offensive games in Cowgirl history, scoring 34 points against UNLV in 2000 and 33 points vs. Idaho State in 1999.   She is also third in steals (169) and third in free throws made (390).  Named MW player of the week twice, she co-holds (with Ashley Elliott) the Arena-Auditorium record for field goals in a game by a Wyoming player with 13 vs. Penn in 1999.  A three-time all-conference academic selection and Mountain West Scholar-Athlete, she was also named Academic All-District VII three times.  A native of Colorado Springs, Colo., Bacon majored in Exercise and Sport Science at Wyoming. 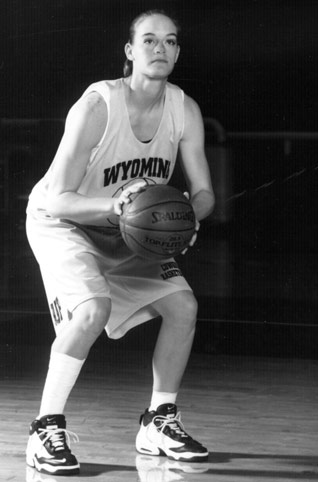