The 1989 Wyoming Cowgirl Volleyball Team was one of the most successful in the school’s history. Not only did they win Wyoming’s only High Country Athletic Conference volleyball title but played their way past Washington and Stanford to earn a spot in the Elite 8 of the NCAA Tournament. They finished with a program best 24-7 overall record and an amazing 11-1 conference mark. The team boasted five All-HCAC players; Ginger Bruere, Darcy Cudaback, Dailene Glenn, Chris Lull and Judy Peck, along with the HCAC Player of the Year Chris Lull and the HCAC Coach of the Year, the late Mike English. Three individuals, Cudaback, Lull and Peck were named to the AVCA All-Region Team, while Darcy Cudaback earned AVCA All-America honors, the only player in school history to do so. Several individuals also currently rank among the Top 10 in the Wyoming record book. Cudaback still holds the record for kills in a single season with 595, and ranks second in her career with 1,533. Peck is among the Top 10 in kills and blocks, while Chris Lull still holds the fifth spot in career assists with 2,609. The Cowgirls’ success also earned head coach Mike English, who still has the best career coaching record at Wyoming at 124-86 during his seven years, West Region Co-Coach of the Year honors with UCLA’s Andy Banachowski. 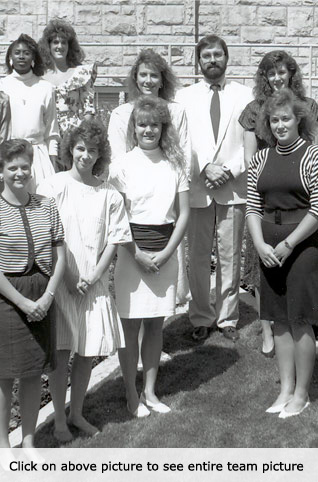