It was a dream season for the Wyoming ski team. Coached by John Cress, the 1968 Cowboys became the second team in Wyoming history to capture an NCAA Championship–along with the 1943 basketball team–by winning it all at Steamboat Springs, Colorado. When the Cowboys lost the national title the year before by less than one point to perennial power Denver University, at Kingfield, Maine, there was a feeling that the `68 team had a great opportunity to win the title. After finishing third in three meets that season, the Cowboys won the NCAA Regionals at Winter Park, and entered the national meet as one of the favorites. The Cowboys fared very well in the first three events of the meet, slalom, alpine combined (downhill and slalom) and nordic combined (cross country and jumping), and were just four points out of first place heading into the final day, with their strongest event, jumping, coming up. The Pokes rode the flying skis of Peter Robes, Tim Denisson, and Bruce and Dave Jennings to overtake Colorado, Denver and Ft. Lewis College to earn the National Championship. Robes, a freshman, won the jumping event with 221.1 points followed by Denisson who scored 221. Bruce Jennings was fourth and his brother Dave was tenth. Junior Mike Uberauga placed fifth in the slalom and senior Ron Sargent was fifth in the alpine combined. In the nordic combined Dave Jennings was fourth. With the victory Wyoming dethroned Denver which had won seven straight NCAA ski titles and 11 of the previous 14. Junior Erik Piene won the meet’s Skimeister Award for the best performance among skiers competing in all four events. 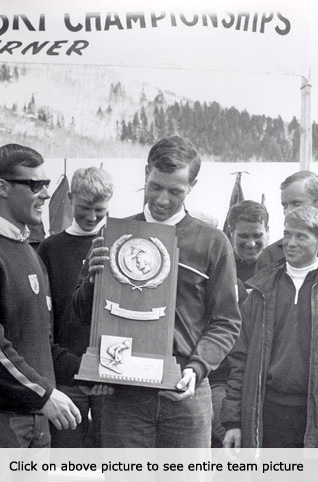