As the only undefeated major college team in the nation in 1967 at 10-0, the Wyoming Cowboy football team was invited to participate in the 1968 Sugar Bowl, against Louisiana State in New Orleans, La. After winning their second straight Western Athletic Conference Championship, and four previous bowl victories, the Cowboys of 1967 were on the threshold of greatness. Led by captains Mike Dirks and Jim Kiick, Wyoming would outscore its opponents 276-99 during the 1967 season. On New Year’s Day, 1968, Wyoming would take a commanding 13-0 lead into halftime of the Sugar Bowl, and make their claim as one of the premier college programs in the country. Unfortunately for Cowboy fans, LSU would outscore Wyoming 20-0 in the second half to win 20-13, and hand the Pokes their only loss of the season. In that illustrious season, the 1967 Sugar Bowl Team would climb through the rankings all season before peaking at No. Five. That No. Five ranking is still the highest any Cowboy Football Team has ever been ranked. 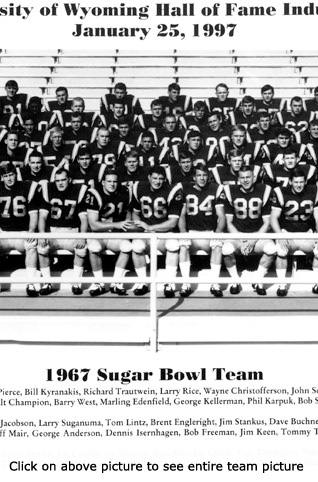