Hallock was hired as the Athletics Publicity Director in 1949 and became the first to hold the title of Sports Information Director in 1954. A pioneer and innovator in his field, he was elected the first president of the College Sports Information Directors of America (CoSIDA), and served on numerous Boards of Directors, including the American College Public Relations Association, Football Writers of America, U.S. Basketball Writers, and the National Football Foundation Hall of Fame. He also coached Track & Field at Wyoming from 1950-1957, andcoachedseven Mountain States Conference Champions. After leaving Wyoming, he went on to become the Sports Information Director at the University of California-Berkeley, the Director of Public Relations for the NCAA, the Commissioner of the Western Athletic Conference, and the Commissioner of the PAC-8 Conference. He was a member of the first UW Athletics Hall of Fame Selection Committee. 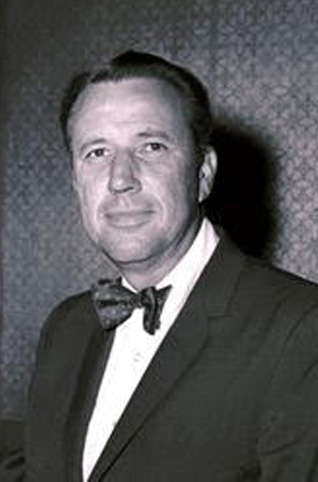