A native of Cody, Wyo., Pete Simpson lettered in basketball and earned his bachelor’s degree in history at UW in 1953. Since then he has been a tireless contributor to the University of Wyoming. After serving four years in the U. S. Navy and several years in private business, Simpson returned to UW for his master’s degree in History. He then moved to the University of Oregon to earn his Ph.D., also in History. In the early 1970s, Simpson returned to Wyoming and began a career as an administrator. He served as an assistant to the President at Casper College, then became Dean of Instruction at Sheridan College. While in Sheridan, he was elected to and served two terms in the State Legislature. In 1984, Simpson became UW Vice President for Development and Executive Director of the UW Foundation. He resigned from that post to run for Governor in 1986, and returned to UW as vice president for development and alumni affairs and later vice president for institutional advancement. After retiring in 1997, Simpson taught at UW as an adjunct professor of history and was the Milward Simpson Distinguished Visiting Professor in 1999 and 2000. An energetic and highly visible supporter of UW Athletics, Simpson has served as an emcee at several of the Hall of Fame banquets. 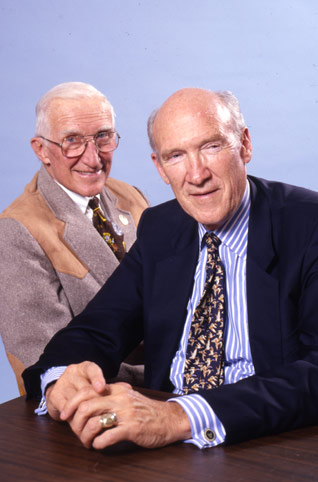