One of the fastest wingbacks and finest pass receivers ever to play at Wyoming, Watts was a threat to score every time he touched the football. He earned AP All America Honorable Mention honors and was named All-Skyline Conference as a senior in 1956 as the Cowboys produced a 10-0 record and finished 19th in the final AP poll. That season, he averaged 6.2 yards per carry with ten catches for 287 yards with eight touchdowns. He was 5th in the nation in punt returns. Nicknamed the “Mississippi Flash”, he was named AP Outstanding Newcomer in the Skyline Conference as a sophomore in 1954 after averaging 8.3 yards per carry and catching ten passes for 291 yards. He led the team in scoring with eight touchdowns. In his junior year, he averaged 8.87 yards per carry to lead the conference and scored five touchdowns. Watts also excelled at Track, lettering two years and winning the 1956 conference championship in the 440 yard run. 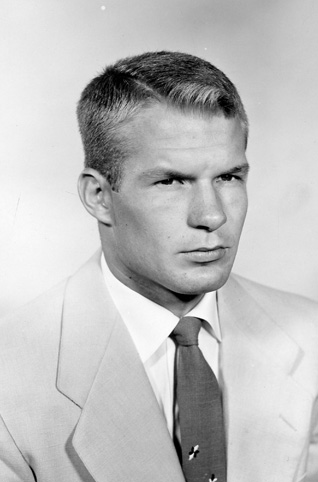