Arguably the greatest track and field performer in University of Wyoming history is Mickey Dunn. Dunn came to Wyoming from Johnstown, Colo., averaging 15.5 points per competition to reach a phenomenal total of 574.5 points in his three seasons of eligibility. In the 1951 Skyline Conference championship, he walked away as the 220 yard low hurdle and 220 yard dash champion. He was runner-up in the high hurdles, 100 yard dash, broad jump, high jump and placed in other events. Incredibly, Dunn still holds Wyoming’s record in the 400 meter dash at :47.84 seconds set in May of 1951 and the 200 meter dash with :20.76 seconds which was one of the best track and field marks in the world that year. Dunn passed up the opportunity to develop his talents at a national level to ensure Wyoming was competitive in the conference. In 1952, he received the Robert E. Russell Memorial Award for the outstanding Amateur Athlete of the Year. Mickey Dunn, sometimes called Wyoming’s “one man track team” was truly one of Wyoming’s greatest athletes of all time. 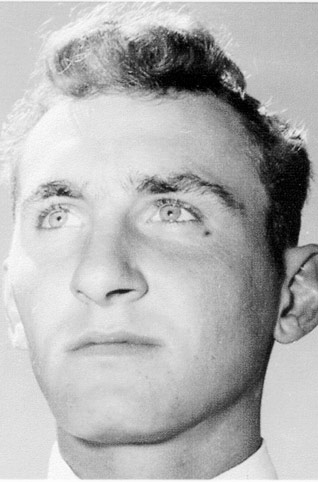