The 1986-87 Cowboy Basketball team captured the hearts of the Wyoming fans. Riding high from their NIT finals appearance the year before, the 1986-87 Cowboys were 24-10 overall, 11-5 in the conference. They had a chance to win a share of the regular season Western Athletic Conference title, but lost a heartbreaker at UTEP, 74-72, in the last game of the season and ended up tied for third place. The `Pokes then went on a magical run in the WAC tournament at the Pit in Albuquerque, winning three consecutive two-point thrillers. The Cowboys defeated Utah in the first round, 56-54, on a short jumper by junior guard Reggie Fox with three seconds left. Facing league champion UTEP in the semi-finals, the Cowboys needed a three-pointer from Fox with ten seconds left to win, 77-74. In the final round, the Cowboys were up against New Mexico on its home floor. This time, the Cowboys won 64-62 on two free throws from senior guard Sean Dent with 11 seconds left to capture the WAC Tournament championship and the NCAA automatic bid. Junior center Eric Leckner was named the MVP of the WAC Tournament (for the second year in a row) after scoring 67 points in the three games. The Cowboys were seeded 12th in the NCAA Tournament West Regional at Salt Lake City, and Wyoming fans flocked to neighboring Utah to cheer on their team. The Cowboys surprised 5th-seeded Virginia of the Atlantic Coast Conference, 64-60, behind Leckner’s 22 points and junior swingman Fennis Dembo’s 16 points and nine rebounds. In the next round, the Cowboys became everyone’s “Cinderella” team by defeating UCLA and its star Reggie Miller, 78-68. Dembo became a household name by scoring 41 points, including a tournament record 16-16 from the free throw line. Advancing to the “Sweet 16″ in Seattle, Wyoming faced eventual national runner-up UNLV and played well before losing, 92-78. For his efforts, Dembo was named first team all-conference, first team all-district VII, and the WAC player of the year. Leckner was also named first team all-conference and first team all-district VII. Dent set the Wyoming single-season assist record with 183 assists, while Dembo set the single-season record for three-point field goals with 78. With all five starters returning On the heels of the “Sweet 16″ appearance, and with all five starters and ten lettermen returning, the Cowboys were ranked #10 in the 1987-88 pre-season polls and Dembo was featured on the cover of the Sports Illustrated college basketball preview issue. 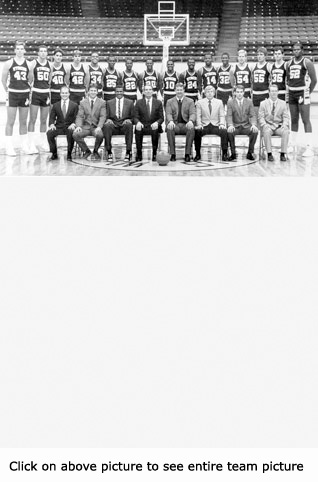