It was the finest season in 28 years for the University of Wyoming basketball team as the Cowboys finished the year with a 24-6 record, their best since the 1952 team went 28-5. The Cowboys tied the University of Utah for the Western Athletic Conference Championship with a 13-3 record and earned Wyoming’s first NCAA Tournament berth since 1967.  Led by three-time All-WAC first-team senior Charles “Tub” Bradley, the Cowboys closed out the regular season impressively winning their last six in a row, including memorable sellout home wins over nationally-ranked Brigham Young (#14) in double overtime and Utah (#7) as well as decisive road wins at UTEP, Colorado State, Air Force and UNLV. The Pokes finished the year with a perfect 14-0 mark in War Memorial Fieldhouse and an impressive 9-5 road record. Led by WAC Coach of the Year Jim Brandenburg, they defeated their 14 home opponents by an average of 23.6 points per game. In the NCAA Tournament first and second rounds in Los Angeles, the 5th-seeded Cowboys defeated the 12-seed Howard by a score of 78-43 before losing a heartbreaker in the second round to the 4th-seeded University of Illinois, 67-65.  Bradley led the Cowboys in scoring average (19.0) and minutes played. He scored in double figures in all but one game for the Cowboys, and hit 20 or more points in 10 games, including a season-high 31 points vs. BYU. The only other senior on the team, forward Kenneth Ollie, led the team in rebounding (8.8 per game) and was third in scoring (10.3).  The second-leading scorer was junior forward Bill Garnett at 13.9 points per game. The Cowboys ranked as high as 17th nationally, and led the nation in field goal defense (40.1) and scoring margin (16.1).  They led the WAC in field-goal percentage, scoring margin and rebounding margin.  The 1980-81 team brought excitement back to Wyoming basketball and set a record for attendance in the Fieldhouse with an average crowd of 7,060. 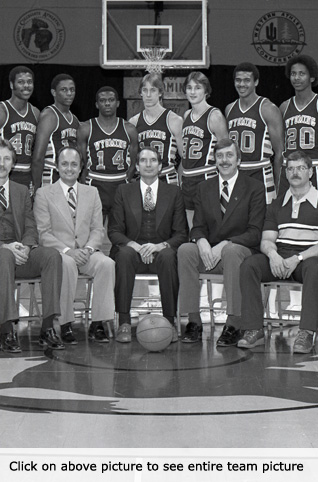