“The Little Engine that Could”

Possibly the most over-achieving team in Cowboy basketball history, the Pokes were in the 7th strongest of 18 conferences in the country. Two Western Athletic Conference teams were nationally ranked, and each of them had a future NBA first-round draft pick. Moreover, the Cowboys were relatively short on experience and size. The outlook wasn’t promising. It was going to be a “rebuilding year.”

Despite early impressive wins vs. non-conference teams Nebraska, New Mexico State, and Texas Tech, and a WAC-opening victory vs. #3 New Mexico, the Cowboys were only 6-10 by the end of January and 1-2 in the WAC.

Then two players left the team, including the Pokes’ leading rebounder and 2nd leading scorer.

Enter the “Shuffle.” In an emergency effort to salvage the season and maximize their chances of winning, Coach Bill Strannigan adapted the offense to fit the talents of the remaining players. The “Strannigan Shuffle,” as it came to be known, was a brilliant scheme and an instant success against taller teams. Emphasizing a slow-down, ball-control style, with four of five players cutting and moving, the Shuffle drove defenses crazy. With no shot clock, the shorter but quicker Wyoming players leveled the playing field. They were hard to guard and their patience resulted in open shots and layups.

The Cowboys surged to finish the regular season on an 8-2 run and 7-0 in the WAC. This forced a playoff game with co-champion Brigham Young University in Salt Lake City for a ticket to the postseason. The Cowboys won the game and became Wyoming’s only entry in the NCAA tournament between 1958 and 1981. It was a miracle finish no one had foreseen.

Even though the Cowboys didn’t advance in the Tournament – losing to #1 UCLA and in a squeaker to #10 UTEP – their modest 15-14 season belies a historic comeback which serves as an inspiration to other teams when facing adversity. The willingness to change their whole approach to offense in midstream along with the right leadership and team commitment achieved the ultimate victory. 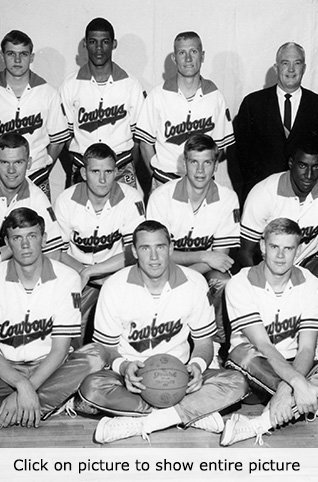